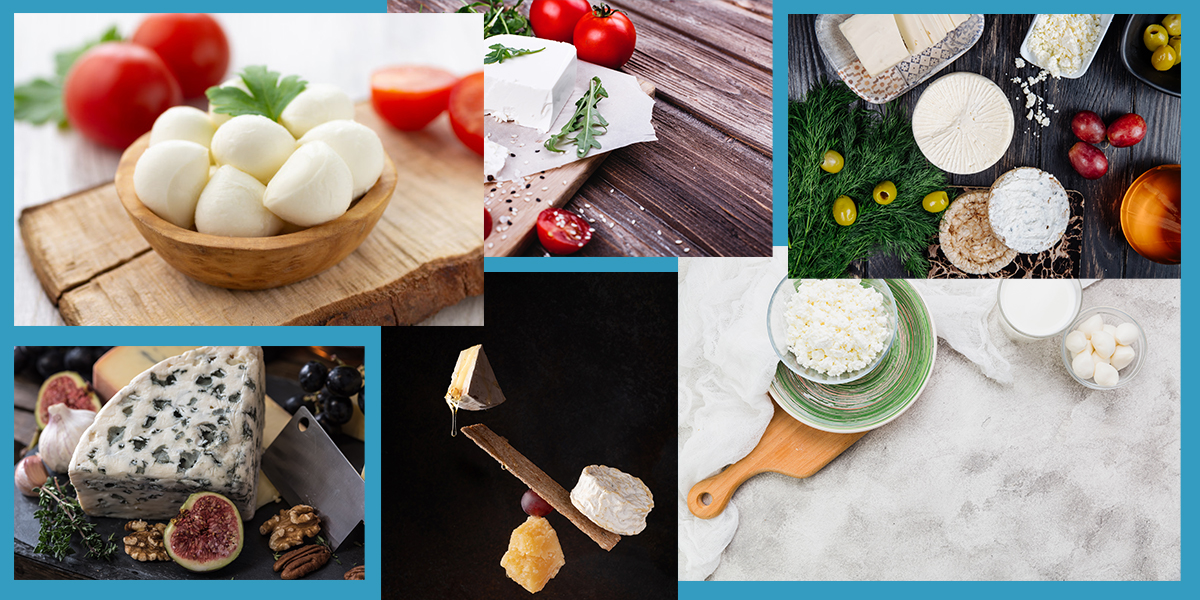 If you’re a fellow cheese enthusiast, you may be wondering about certain cheese terms, or just wanting to learn more about cheese products. With all the information we come across every day, it can be confusing to know what certain cheese terms mean. If you’re looking to deepen your knowledge on cheese, you’re in the right place as this article will serve as a guide that describes each cheese term along with its taste, aroma, and texture. Read below for an explanation of cheese terms (acidity, age, pasteurized) and a reference to all the different types of cheese out there on the market so you can decide what to put on your next charcuterie board.

Looking at the chart below, you’ll see the aroma, taste, and texture of aged cheddar, mozzarella, blue cheese, ricotta, feta, gouda, and more. You may even be so intrigued you might want to make your own cheese. Whether you’re into bitter cheeses like aged cheddar or a bit on the sweeter side like goat cheese, you’ll be able to identify many cheeses by reading on. You’ll even be able to find other cheeses with similar texture and flavors of your current favorites. If you’re into salty cheese like romano, or you like more acidic such as cream cheese, we will help you learn more about what other cheeses you may like in these categories. Before deciding what kind of cheese you’d like to experiment with making, you may also want to ask yourself: what texture do you like most? Crumbly or pasty? Or, chalky and grainy? There are cheeses that are soft and spreadable and ones that are harder and firm.

This is a white, mold-ripened cow’s milk cheese, and is a smaller cheese around four to five inches in diameter and one and a half inches tall. It is soft ripened and creamy in texture with an edible white mold rind, which is considered to be a delicacy.

Brie is large and flat, measuring about 14 to 16 inches in diameter and between one and two inches tall. The surface area allows for more moisture evaporation during aging, which impacts both the texture and flavor of the cheese. It is a white, mold-ripened cow’s milk cheese.

Gouda is a mild-flavored, yellow cow's milk cheese originating from the Netherlands. It has a semi-hard texture and is characterized by its aromatic and caramel-like flavor combined with its dense and springy texture. It also has hints of nuts with sweet and creamy notes.

Mozzarella is traditionally a southern Italian cheese made from Italian buffalo's milk by the pasta filata method. Similar to other fresh cheeses, mozzarella fresco is high in water content and therefore low in fat. It has a slightly acidic or lactic taste and also a milky flavor.

This cheese is made with cultures of the mold Penicillium, giving it spots or veins of the mold throughout the cheese, which can vary in color through the shades of blue and green. This carries a distinct smell stemming from various specially cultivated bacteria.

French for Goat’s cheese i.e. cheeses made out of goat’s milk. This is a popular cheese among elderly and children who are more likely to show low tolerance to cow’s milk. Also, goat cheeses are lower in fat and higher in vitamin A and potassium.

This is a dairy product made from cow’s milk, from the fat and protein components of milk or cream. It is a semi-solid emulsion at room temperature, consisting of approximately 80% butterfat. It has a rich flavor and is used for cooking or as a spread.

Feta cheese is a brined curd white cheese originating in Greece from sheep milk or from a mixture of sheep and goat milk. It is a crumbly aged cheese, usually produced in blocks, and has a slightly grainy texture and often used in Mediterranean or Italian foods such as salads and pizzas.

This is an Italian whey cheese made from sheep, cow, goat, or Italian water buffalo milk whey left over from the production of other cheeses.

A measure of the level of free and potentially reactive hydrogen atoms (H+) within a liquid. This is significant while making cheese because it influences the quality/texture/malleability of the curd, as well as acting as a preservative (more acid, less spoilage). High levels of acidity can provide crumbliness to a cheese, whereas a cheese like mozzarella requires an exact level to be stretched. Acidity is measured in pH units, the lower the pH, the more acid. Neutral is 7.0.

This is the process by which cheese develops its flavor through microbial action on the proteins, sugars, and other molecules in the cheese.

Blue cheese is a cheese which intentionally contains blue molds (e.g. Penicillium roquefortii or Penicillium laucum) which gives it spots or veins of the mold throughout the cheese, which can vary in color through various shades of blue and green. This carries a distinct smell, either from that or various specially cultivated bacteria.

A cheese made using a step called 'Cheddaring' where blocks of curd are stacked on top each other where heat and pressure help to drive out whey. Cheddar is a relatively hard, off-white sometimes sharp-tasting, natural cheese. It has a pungent flavor, often slightly earthy. This is typically used in a lot of dishes and is liked either mild or sharp depending on taste.

Pasteurized cheese is cheese that is produced with milk that has been heated to a temperature of 161 F for fifteen seconds or to 145 F for thirty minutes or more. Pasteurization kills pathogens such as Listeria and E. coli (and others like Staphylococcus aureus and Salmonella) which can be present in raw milk.

The process of coagulating milk due to the introduction of rennet, which is an enzyme.

This term is used to describe a cheese that breaks away when cut.

Usually refers to a flavor similar to that of hazelnut.

This term describes a process used in the crafting of cheese, particularly cheddar. Curd is cut into blocks, and these blocks are turned and stacked at the bottom of the cheese vat every 15 minutes for about 90 minutes.

The outer layer of a cheese can be called the rind, which can be of many textures, colors, and flavors. It is usually edible, unless it is made of wax.

Rennet is a group of enzymes that is made in the stomachs of certain mammals. Amongst the group of complex enzymes, chymosin is a key component in Rennet, and in cheese making, because it is an enzyme that curdles the casein in milk. Rennet is a helpful ingredient when making your own cheese.

Now you have a brief overview of the cheese and cheese terms, so now you can start creating your own charcuterie board or even make your own homemade cheese! At the Cheesemaker we have many detailed recipes and cheesemaking supplies to help you along your cheese making journey!